There are two halves to my column this month – considering the unexpected, and the unconventional.

As the war unfolds in Ukraine, we quickly have come to recognise the inspiring leadership being shown by President Zelenskyy. The phrase “Cometh the hour, cometh the man”, was never more apt. Elected to high office from an unconventional background, his response to the unfolding situation has similarly not followed the conventional political play book.

His ability to communicate an effective message both inside and outside his country, bypassing traditional diplomatic and communication channels, and his intelligent use of social media meant he was out and visible across his country and the wider world. Busting the myths that he was hiding or cowering away from the looming threat and validating his claim that he has refused safe passage out of Ukraine for himself and his family.  And keeping it in the family, his wife Olena, has also been very adept at supporting the country’s efforts.

First Lady of Ukraine, Olena Volodymyrivna Zelenska is from a STEM background studying architecture in her early career. She has been a strong advocate for women’s rights and gender equality, giving speeches on equal rights for men and women and leading an initiative on establishing a barrier-free society. In a recent statement Olena highlighted the incredible contributions that women are making to the war effort.

We have all been gripped by these daily unfolding events in the news cycle but one month in this is just the tip of the humanitarian iceberg – we will have to maintain this level of solidarity for the long haul. To support the ongoing humanitarian crises in Ukraine and Afghanistan you can donate money to the Disasters Emergency Committee (DEC) or donate clothes, food, and supplies to local collections across the UK.

Talking about icebergs – in our work at Equate we often talk about the culture iceberg, what lies hidden beneath the surface, and how it still freezes out women’s equality, and of course the recurring foe of the gender pay and bonus gaps. Empty words and false promises aplenty have been said on this topic but the cold reality is it is still a significant problem. 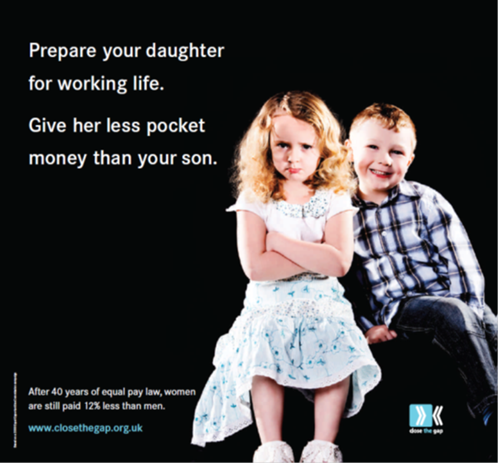 Reflecting back on the programmes we have run in the last few months a number of themes have emerged. On the positive front, an increasing number of organisations are recognising the need to adopt a more inclusive and diverse approach to the way their organisations work.

This is also reflected in the fact that increasingly more and more tender and funding bids require them to show their ED&I credentials. The business case imperative is focusing their efforts. But is it yet another tick box exercise? On the tip of the iceberg, organisations have an ED&I policy. Tick. They may have an Inclusion Committee. Tick. But submerged beneath the PR and good intentions there is not always substance in the lived experience of employees.

KPIs are how businesses run their organisations. Situations that fall out of line or behind schedule are not allowed to continue. They are fixed. So why, when it comes to fixing out of line gender pay and gender bonus gaps does that “rule” not apply?

My dad was a trade union official, he used to say the most used phrase he heard was “Ah well, now John… this is not a good time to be asking for a pay rise”. It seemed that his timing on that front was always off!

So, when it comes to the gender pay gap, and gender bonus pay gap when is a good time? Shall we make an appointment – put the date in the diary perhaps? Could we have a national “Finally Fix the Gender Pay Gap Day”?  Or, as the TUC highlights, should women just continue to donate two months of free work every year?

Why is it still okay to underpay women and in turn impact on their potential retirement earnings? Of course, it’s never quite the right time, but at the end of the day by not addressing the gender pay gap organisations are making a conscious choice not to pay women equally.

An EU 2021 study on gender equality highlights that post Covid there is a danger that women’s rights will be rolled back 25 years. But having rights and being able to exercise them are two entirely different things.

“Courage Calls to Courage Everywhere” are the words on the Millicent Garrett Fawcett statue in Parliament Square in London. Those words were true then and given all that is happening in our world today they are perhaps even more so now.

However, when it comes to closing the gender pay, bonus, and pension gap it is a war of attrition. That also calls for courage – and perseverance. So here is a thought, what would happen if all the women in STEM organisations took a leaf out of Millicent’s play book, asked for the company gendered pay and bonus pay gap data, and what their plan and timescale is to actually close the gap?

If timing is all, perhaps this new found focus on ED&I in tender and funding bids is the right time not to follow the conventional and compliant play book.