In 2016, Forbes completed an extensive study into STEM based on LinkedIn profiles and how women in particular moved within job roles during their career paths.

According to LinkedIn data, Women only hold 23% of STEM (Science, Technology, Engineering, Mathematics) roles worldwide, with the proportion of females dropping as we move to look at management and then further C Level roles.

This leads us to wonder exactly why this is – why are fewer women reaching the top management and board level roles compared to their male counterparts. Having a smaller workforce isn’t the answer here as this is based on their career stopping point rather than percentage in the management role.

What is missing in order to keep women and encourage them to progress higher?

“Overall, as an industry, we have a responsibility to showcase that our women engineers, scientists and mathematicians matter.

That their work matters.

When we asked women in STEM what motivates them at work, they were less motivated by money or status than men were, and more focused on purpose.

Show women how their work fits into a greater purpose, encourage open communication and transparency and invite your STEM women to share their experiences with colleagues.

After all, your best advocates are your happy employees.” 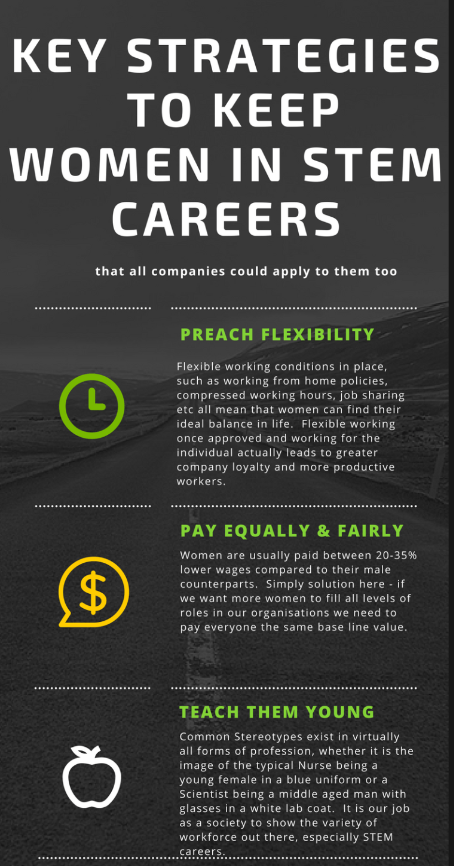 When not raising her two young boys, she can be found developing her Social entrepreneurial company Stereotype Clothing (stereotypeclothing.co.uk) to raise STEM career profiles in the UK or creating her personal family lifestyle blog & vlog channels.

All language used in guest blogs is the author’s own. Interested in writing for the Equate blog? Find out more here

Summer heats up as internships kick off

If you do not want that we track your visist to our site you can disable tracking in your browser here: